Silence is Stainless - The search for the Holy Grail. 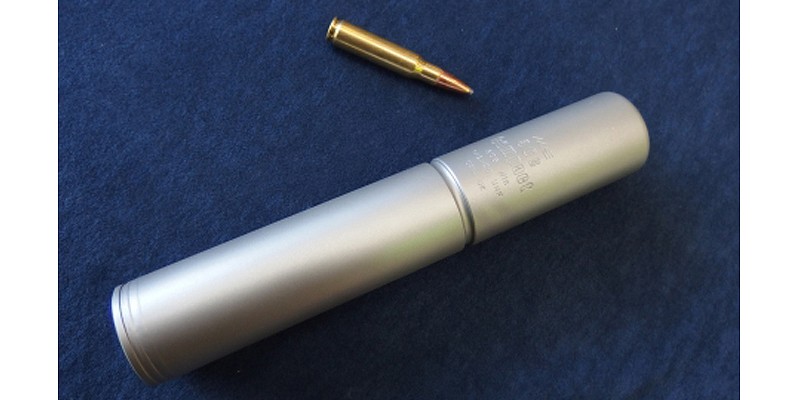 Silence is Stainless - The search for the Holy Grail

For some years I have been an avid proponent of titanium as a material for sound moderators, before which I used steel, either stainless or mild. The move to titanium came through constantly striving to improve the balance, weight and looks of a stalking outfit designed for proper use, not one to sit in a gun cabinet and be admired. I primarily moved to titanium with weight and longevity in mind, the only downside was the high cost involved. Much has been written about titanium and its use in moderators, mostly focussing on the cost which is nothing unusual for the UK stalking fraternity, yet will often be the deciding factor. My allegiance to both Blaser and Swarovski has come about through use of the product over many years in almost every imaginable circumstance. They have never once let me down and have endured far more than the average shooter would put them through in a lifetime. I have a three year old R8 barrel on one of the range rifles that has now had in excess of 15,000 rounds through it and it still shoots a sub 2cm group, testament to their quality if ever it was needed. Similarly with Swarovski, they have all been used and abused, and thoroughly put through thier paces. Simply put, they work. They always have and I expect they always will.

Of course there have been some upgrades and tweaks along the way, the Blaser R93 giving way to the R8 and the Swarovski Z6i being upgraded to the generation 2 model. What is key here is that the design is largely the same, it is tried, tested and trusted worldwide, and at present there is nothing on the market which fits my requirements better. So, how come I started looking at new moderators? The Blaser and Swarovski combinations that I use, are in mine and I suspect many others opinions unbeatable. Make no mistake, if Blaser or Swarovski or for that matter, any manufacturer comes up with new products, you can be sure that I'll get hold of them to try, and if they prove better suited for my needs than what I am currently using, will be replaced. Back to moderators. Until recently I had more or less given up searching for the Holy Grail of moderators. I had settled on titanium, it is durable and lightweight, but very expensive. However, as a non consumable item the higher purchase cost can be over looked to some degree. A few months ago, a chance conversation with an old aquaintance got me thinking whether titanium was actually the right choice of material for my needs. Had one of the older moderator manufacturers been working on an improved model to remain competetive? Or, was there a new kid on the block?

For the last few years I have been happy with titanium and the model I was using did its job very well, but in order to get better noise attenuation from the thinner material, extra baffles had been added to what was already the largest model available, so the added weight and size dimensions left me with a pretty ungainly arrangement, which was one of the reasons I'd moved to titanium in the first place. I now had a large, weighty and expensive moderator! I had also heard a number of concerns over the shelf life and brittleness of titanium, leading to several aircraft and car manufacturers refusing to use it in their machines. Now, admitedly a moderator is unlikely to be subjected to the stresses and strains of an engine or aircraft, even one which gets as much abuse as mine, but even so, it made me think long and hard about the long term effects, and the potential implications. So, if titanium now has a question mark over it what other options were out there? A number of manufacturers have hung their hats on lighteight alloys as the solution, and admitedly there are some very light weight versions on the market, with many benefits being purported. Unfortunately lightweight alloy moderators are simply not designed to withstand repeated and heavy usage, and ultimately will corrode and possibly fail. The strip down versions are also questionable, with several issues already coming to light, ranging from baffles blowing off down the range, to extra baffles being added causing massive accuracy issues, both of which I have seen on more than one occasion at the range. Although no harm came to either me or the owners, apart from dented pride and disbelief, it was enough to discount them immediately. This brings us back to steel, the original material from which all moderators were made and which still remains the benchmark. Unfortunately, going back to steel brought back all the old issues - weight, size and durability. Prior to moving to titanium I was using two excellent moderators from ASE Utra of Finland, the Jet Z Compact, a muzzle can made from mild steel, and the Northstar, an over barrel design made from stainless steel. Both had their pros and cons but by and large were excellent, and I still use one of the Jet Z designs on a long range rifle at present. The main issue was weight, with the Northstar weighing in at almost 700g and the Jet Z at 510g - incidentally, the titanium model I was using with the addition of the extra baffles, was 620g and almost twice the size of the Jet Z. For comparison, one of the better selling alloy versions, the A Tec Maxim, weighs in at 460g.

So, if I could find a moderator that was compact, weighed around 400 - 500g with excellent durability and noise attenuation, I would surely be onto a winner. But did such a beast exist? Enter MAE moderators from New Zealand, formerly know as PES. To those of us who have been around the rifle world a while, the name has always been synonimous with high quality stainless moderators. The downside as always was the size and weight issue. It's simple physics, lightweight, thin material is not the best for reducing sound unless many more baffles are added which bring weight and size into the equation. Another downside was the manufacturers unwillingness to supply the vast range of thread sizes now fashionable. The old aquaintance and the man behind the products in the UK is Julian Savory of JMS Arms. Julian has been around moderators for a long time and could be classed as something of an authority and it was the chance conversation with him that led to a change of moderator. Many years ago, before I used ASE Utra products, I was an MAE fan, and used their T12 and T12 Scout designs and it was only when I moved to Blasers' 15 x 1 spigotted thread that I had to move away from them because they did not like the spigot idea in a moderator. The weight I could have lived with as the sound attenuation was superb. What followed was an introduction to a new product, the Compact BL, a highly durable stainless steel, over barrel bushless design, with a sensible weight with excellent sound attenuation - the only down side, no spigotted thread! Firstly, the material. Not all stainless is the same, as with most materials there are different grades and MAE will not compromise and use only the highest quality giving not only outstanding durability but the highest corrosion resistance possible.

As luck would have it, one of my 308 barrels, the 15,000 round one had been shortened to 20' and a standard 15 x 1 thread replaced the spigotted thread - an order was placed for when they arrived in the UK. Last week, I headed to the range with a slection of moderators, tape measures, guages, scales and a pile of ammo. The only piece of equipment that I didn't have was a decibel meter. Without going into the ins and outs of decibel meters, most moderators will reduce noise output by 24 - 34 DB and a decibel meter can give two identical readings but one may sound noisier than the other. I'm no scientist so can't really explain this, but one thing I can rely on is the Mark 1 Ear, it's how we hear the sound that matters and the peak pressure levels that are experienced. For instance, some moderators give a distinct bang, some more of a crack, some a boom. These moderators may have exactly the same DB reduction, they just sound different to us, largely down to the material used in the moderator and the baffle construction. I have had several moderators at the range, where even out stalking, I would want ear protection as they just sounded so loud, yet claimed impressive noise recuction capabilities. So how would the new compact perform against the competition? To keep it short, it was everything I would expect of a MAE moderator. In the confines of the range shelter there were only two mods that i would ever consider using without ear protection, the Jet Z Compact and the large titanium one, there is now a third, the Compact. Perhaps the most surprising result was what appeared to be an increase in the accuracy. At first I put it down to my shooting, but time after time it outshot both the other moderators, why? I have no idea. Better barrel harmonics? The bushless design? I'm still puzzled!